In august a live-music bus can be seen on the streets of Budapest. Inside the Schweppes JazzMobil professional musicians play along until various destinations where on some weekends famous singers join the show. Featuring the Schweppes JazzMobil free outdoor concerts can be attended with performers Pély Barna, Veres Mónika Nika, Gájer Bálint, Galambos Dorina.

There’s no doubt the coolest thing this summer can bring is the Schweppes JazzMobil raiding the city on the weekends of august from 4 to 7 pm in the mighty streets of Budapest. In the bus a professional band plays to entertain the passers-by, tourists and even individuals travelling with public transport.Artists contributing to the performances beside the famous singers carrying the name of the concerts are: Dániel Görögh (trumpet), Márk Köles (percussion), Zoltán Cséry (piano), Péter Szűcs (Bass).The production was organized under the musical direction of Dániel Görögh.

The idea of the Schweppes JazzMobil came from Milano where the team of Music Fashion Ltd unexpectedly met a band playing in a bus and thought how nice it would be to see something like that in Budapest. The original idea was infused with the concept of professional musicians playing evergreen hits of jazz. The solution Music Fashion invented differs from the bus in Milano by singers joining the show.

Schweppes JazzMobil Guarantees some freshness and style in the hot summer buzz.

Schweppes JazzMobil stops for concerts at.: 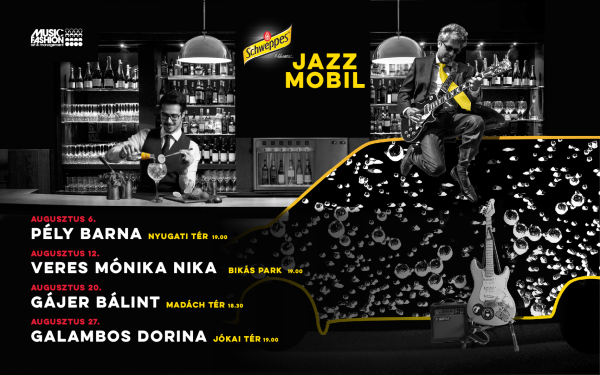